Norman “Bubby” Jones was an American short-track racing icon, an open-wheel master whose trail of victories dotted the map and led him, ultimately, to the Indianapolis 500.

A genuine blue-collar driver, Jones for a time supplemented his racing income with part-time wages earned as a barber in his native Danville, Illinois. But once his career took off, Jones found his services in high demand from team owners looking to employ him and track promoters happy to quietly slip him “deal money” in exchange for the right to advertise his participation in upcoming events; immensely popular from coast to coast, his name was a guaranteed a boost to ticket sales.

Never again would Bubby Jones need to raise or lower a barber’s chair, or handle a pair of hair clippers.

Jones, who died in 2020, is enshrined in the National Sprint Car Hall of Fame.

In this episode, host Tim Coffeen and his guest, author and columnist Bones Bourcier, reminisce about Bubby’s career, his engaging personality, and the wanderlust that became his trademark.

Below are links to the 3-part series Tim wrote about his lifelong friend and mentor.

Mark “Bones” Bourcier has covered American automobile racing since 1976, contributing columns and feature stories to a number of magazines and newspapers. He is a two-time winner of the “Miller Racing Award of Excellence,” one of motorsports journalism’s most coveted annual prizes, and a past recipient of the Eastern Motorsports Press Association’s “Frank Blunk Memorial Award” for outstanding contribution to motorsports journalism.

Among his books are several widely acclaimed motorsports autobiographies, including “As a Matter of Fact, I AM Parnelli Jones,” co-written with the 1963 Indianapolis 500 winner; “True Speed: My Racing Life,” with two-time NASCAR Sprint Cup champion Tony Stewart; and “The People’s Champ” with USAC legend Dave Darland. A Connecticut native, Bourcier now resides in Indianapolis. Most of his books are available at www.coastal181.com

Tim Coffeen, host of “Tim Coffeen Talks Indy car and Racing History,” will share stories and memories from his long career with top Indy car teams.  As a winner of seven championship rings, Tim not only understands the history of open-wheel racing, he has lived it! 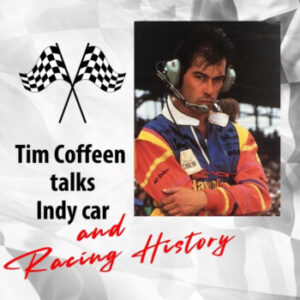