The name Chuck Taylor should ring a bell for any basketball fan. But you may not know his contribution to the game. Almost anyone who knows anything about fashionable footwear also knows the name Chuck Taylor. You might even have a pair of his shoes in your house right now.

His shoes are those canvas athletic shoes with a piece of white rubber covering the toes. Today the shoes come in a variety of colors. You can find them in low tops, high tops, and some that go all the way up to the bottom of your calves. I’ve even seen a custom-made pair that went all the way up to the knees.

Who Was Chuck Taylor?

Why has this iconic shoe been named after him? Well, you might be thinking that he must have been one of the greatest players of all time, right? Well, he wasn’t. He did not even play college basketball. But despite that he still played 11 years of professional basketball in the 1920s and early 1930s.
So, let’s go into his origin story.

Born in Columbus, Indiana he was a high school basketball star. He was chosen as an all-state player during his junior and senior years in 1918 and 1919. From there he went directly into semi-pro basketball. Semi-pro means that he was getting paid to play the game, but he also had a day job to make ends meet. Today we would call that a side hustle. Basically, basketball was his side hustle. And this is how it was in the 1920s.

There were virtually no players in that day which could completely support themselves and their families from just their basketball income. The average guy would have had to play 200 games a year to make enough money to live on.

While all of this was happening and Taylor was playing semi-pro ball, there was a new shoe company in Boston founded by a man named Marquis Mills Converse. His company was called the Converse Rubber Shoe Company. He made shoes for men, women, and children with rubber soles. You might be thinking, so what?

Well, having rubber on the bottoms of the shoes meant that you would not slip as easily when walking in a pair of his shoes. Converse was one of the first people who thought that rubber soles would be a good thing. Around 1915 he decided to start making shoes specifically designed to be used indoors on a hard surface.

This was a huge development for basketball. Prior to that players would wear something that looked like a high top dress shoe. They were slippery and it made it difficult to change directions quickly. But, that was all they had at the time. So, this really was a huge leap in athletic footwear.

So Converse starts selling his shoes which were a huge hit with basketball players. They did not slip on the court. The rubber sole gave more of a cushion when playing. It was easier to change direction quickly. All of this was really great for the players. But do not get me wrong, they were nowhere near as comfortable as shoes are today.

Even with these Converse shoes, sometimes players would still finish the game with sore feet or blisters. Chuck Taylor certainly did. He wore the shoes and his main complaint was sore feet. The shoes were good, at least compared to what was available before, but he thought that they could be even better.

So around 1921 Chuck Taylor, the basketball player, walks into the offices of Converse Rubber Shoe Company with ideas of how to make the shoe better. He cold called them. He walked in with no appointment. But, based on the ideas he presented them, they hired him as a shoe consultant. He helped develop an updated version of the basketball shoe. The shoe was called the Converse All-Star.

So Taylor started one of the earliest formal basketball clinics at North Carolina State University. There he taught kids how to play this amazing game. And he was doing all this while still playing professionally himself. Whenever he got a chance he would organize clinics all over the place. He literally travelled all over the world trying to spread the message of the game of basketball.

He held clinics in Hawaii, Europe, Africa, Puerto Rico, South America, Canada, and Mexico. Through these clinics he was literally creating new basketball players everywhere he went. And each of those players needed a pair of Converse to play in.

The better that the team played, the more shoes they moved. If TV existed back then, you can imagine a 1920s version of an Air Jordan ad where Mars Blackmon says, “Money, it’s gotta be the shoes!” And the team did play well.

They sold a lot of shoes. They were a Chicago based barnstorming team that travelled around and played basketball alongside the likes of the New York Rens, The Savoy Big 5, the Original Celtics, and the South Philadelphia Hebrew Association.

As he traveled around the country he got to be friends with every significant coach and athletic director in the country. Anyone who wanted the inside scoop on a player or coach only had to get in touch with Chuck Taylor. He knew them all.

His opinion on a player or coach mattered to the basketball community. He was easily the most well-connected basketball person in the country.

He even created something called the Converse Basketball Yearbook. It was kind of like a high school yearbook. It featured the best players, coaches, trainers, teams, and moments of the previous 12 months. It even featured a college All-America team that Taylor selected personally. It was a big deal for players to be named a Converse All-American.

His efforts to popularize the game definitely sold more shoes. After all that was his purpose, to sell shoes. But the game of basketball itself might not be as popular as it is today if he hadn’t taken the game across the globe. You could make a strong argument that the game does not make it into the Olympics in 1936 if it were not for Chuck Taylor.

Now, here is the really great part of this story. The company was so enamored and pleased with Taylor’s efforts that they decided to rename the shoe after him. He was, basically, the best sales person they ever had. From then on the shoe would be called the Converse Chuck Taylor All-Stars, which is what they are still called today. His signature is incorporate as part of the logo featured on the shoes.

All of this happened because his strategy worked. More and more kids were signing up to play basketball. More and more colleges and high schools were adding basketball teams. The professional leagues were growing as more fans were willing to spend money to buy a ticket. The sales of the Converse Chuck Taylor All-Stars went through the roof.

By the 1960s nearly 80% of all basketball shoes worn around the world were Chuck Taylor All-Stars. Not even Nike could ever say that 80% of all the basketball shoes in the world were Nike shoes. Converse had total shoe dominance. These shoes were in the game for a really, really long time. Small improvements were made to the shoe regularly, but the basic canvas shoe was part of basketball at all levels from the 1920s through the 1960s.

That is a 50-year run with basically the same shoe. I mean even the Air Jordans give you a brand new model every year that includes improvements over the previous edition. But in the late 1960s Adidas decided to enter the basketball shoe game. And their leather shoe was a major improvement over the canvas Converse version.

And not to be outdone, Puma also came out with their own version of a basketball shoe that came in suede and was popularized by the legendary Walt Frazier. The Puma shoe was the first basketball shoe that was not only functional, but incredibly stylish. The canvas Chuck Taylor All-Stars were done. They were no longer considered a proper basketball shoe.

As a side note, the guy that started Adidas, and the guy that started Puma were brothers and they were extremely competitive with each other. They were always playing the game of anything-you-can-do-I-can-do-better, which is why they both started making basketball shoes at around the same time.

If I had to provide a list of the people who had the greatest impact on popularizing the game of basketball on a global scale, I would say Michael Jordan, and by extension, the rest of the 1992 Dream Team when they went to the Barcelona Olympics. They showed the entire world what basketball looks like when it is played by the absolute best players in the world.

Then I would say Yao Ming who really opened up East Asia, and particularly China with its one billion people to the NBA in the early 2000s, and Chuck Taylor with all of the clinics he put on all over the world from the 1920s to the 1960s.

Converse would re-enter the basketball market in the late 1970s with a completely redesigned leather shoe, The Converse All-Star 2. This shoe was worn and popularized by Magic Johnson, Larry Bird, and Dr. J, until a later model came along called the Converse Weapon.

But, as for Taylor himself; he would go into semi-retirement in the 1960s enjoying a life of golf and sunshine in Florida. He would later be named to the Basketball Hall of Fame in the category of Contributor. By the way, the Basketball Hall of Fame has five categories for induction. You can go in as a player, a coach, a referee, a team, and as a contributor. Contributor is a general category for anyone who makes a significant contribution off the court to the overall game of basketball. And Chuck Taylor definitely contributed to the overall popularity of the game.

He lived long enough to find out that he had been elected to the Hall of Fame, but unfortunately he died of a heart attack just a couple of months before the induction ceremony was to be held in 1969. His legacy is massive in the game of basketball. Anyone who loves this game as I do owes him a debt of gratitude. If not for him, it’s possible that the game never becomes that popular. And maybe this podcast doesn’t even exist. For that alone I’m extremely grateful.

Chuck Taylor is a metaphorical giant among the actual giants who play this game. He is exactly the kind of person who needs to be remembered by all of us who love basketball and its history. And that’s why I do this podcast. I want to make sure we don’t forget the people who developed and built this game.

Doing a good deed is always a good thing. It... 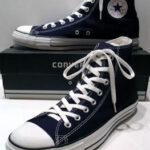 The name Chuck Taylor should ring a bell for any...

Darryl Dawkins was one of the most outrageous characters in...

The development of the one-handed jump shot takes us back...