On January 8th, 2011 Marshawn Lynch went full beast mode on one of the most legendary runs of all time. The 12th man crowd stomped so hard in excitement; it generated seismic activity mimicking an earthquake. In this episode, I’m going to tell you the name of the man that had a run that was a precursor to the famous “Beast Quake”.

This time we step off the DeLorean and the date is November 3rd, 1908. We are in Rainy River, Ontario. Which happens to be a border town across International Falls, Minnesota. I hope that you brought your passport with you because we’re going to the neighbors up to the north of us.

The reason we’re going up there is because our hero was born in Canada and his name was Bronislau Nagurski. Which is better known to you and me as, Bronko Nagurski. In the last solo episode we talked about Red Grange that had a Zeus-like lightning power to him. But this guy, Mr. Bronko, was a thundering, rumbling, hammer-wielding powerhouse of a man.

Kind of reminds me of Madden. The game that most of you, many of you have probably played ever since the inception of the game and if you’re like me purchase the new one each year. They don’t have him in there anymore, but back in the day, it used to be him and a lot of times Pat Summerall and they would have these one liners that in between plays you would get to hear the famous John Madden one liners.

One of my favorites was a total spot on description of this guy. Lets paint a picture here; in Madden I got this dude running the ball, pressing the hit stick. I don’t think they had the hit stick back then. This is an earlier rendition. Anyway, running the ball-smash. Jump cut scene to a huddle and then in the middle John Madden goes, “That guy worked as a bull dozer in the off season”.

That right there would be the guy we’re going to talk about, Mr. Bronko Nagurski. He was a road grader unlike the league had ever seen before. But we have to go a little bit back. We have to start this thing fresh and we have to go back to his childhood days – his early life. And one of the first things we talk about is how did this dude get the name Bronko?

I thought his name was Bronislau. I might be butchering that a little bit, but just in case, because it’s an audio for you- I’m just going to spell Bronislau. Reason why he had that name is because his parents, Michael and Emilia, were Ukrainian immigrants and farmers.

I do not know how truthful this is, but a story in the LA Times for his obituary said that Bronislau was changed to Bronko by a teacher that was perplexed by his mothers accent. She couldn’t understand it, so somehow this came up Bronko. So I declare if that’s true, this teacher is a national hero because she officially gave this dude, what I am calling, one of the most perfect football names of all time.

I’m going to smash you into oblivion and that’s just what that name means to me. Maybe it does for you, maybe it doesn’t. But that’s what I hear when I got that name in my ears. But a name does not make the man. The man makes the name. How do you make that man? You give him some tough stuff, tough love growing up as a child.

When he was growing up there in Canada, in the cold weather, things weren’t easy for him. He would have to get strong as a lumberman and as a farmer. In high school he would take up wrestling, boxing, baseball, and of course football. But, there was a caveat, apparently when he was in his senior year he decided to transfer to Bemidji High School in hopes of securing a college scholarship.

The problem was, he declared him ineligible due to the transfer. He just played basketball instead. It kind of reminds me of Antonio Gates, and some of these other freakish athletes that were basically so skilled that they were able to translate a basketball powerhouse into a football and just meld both of them together and dominate.

The school was called the Bemidji Lumberjacks, which was a perfect fit since he was a lumberman. He had to play basketball, however, he would go on to play college ball.

This brings us to one of our first fantasy story legendary base type occurrences of Bronko Nagurski. Recruiting is common practice as it was back in the day, but the story and the accounts told by that college recruiter that got Mr. Bronko Nagurski to the University of Minnesota that could rival the labors of Hercules himself.

There was an account and it goes as such: Driving by I saw this powerful young man plowing the field. Then I noticed that he had a plow but no horse. I asked him directions to a certain town. And he pointed in the opposite direction with the plow in his left hand.

Imagine, he gets out into the field and he sees this big hulking dude plowing the field by himself-no horse. He’s baffled, doesn’t know what to do. He just signs him on the spot to play for the Minnesota Gophers and he would enter the school in 1926.

His website, which is BronkoNagurski.com stated that he was the only person ever to be named to two positions in the same year, which I believe could be in the realm of possibilities. Because first of all, most times players don’t star on offense and defense at the same time because it’s tough enough alone to try and be good at one position – let alone both.

Then, to be the best at those positions and named consensus All–American in two different positions – that is just unfathomable. Speaking of legend, what is considered to be his greatest college game came against Wisconsin in 1928.

This would be another quote from his website: “Wearing a corset to protect cracked vertebrae, he recovered a badger fumbled deep in their territory and ran the ball 6 straight times to score the go-ahead touchdown.

Later in the same game he intercepted a pass to seal the victory.” Basically, what I grab out of that picture was not only was he the dude you were going to give the ball to shove it down their throats, he was also the character that is going to be on the defense preventing them from scoring the touchdowns.

He’s going to recover a ball, he is going to go ahead and play interception and he is basically going to say get on my shoulders I am going to take us over there to the victory. Overall, he was at Minnesota, the Gophers would have a record of 18-4-2 and they would win the big 10-conference title in 1927.

But now that we are in 1958, lets go back on that DeLorean and tell Mr. Doctor Emmett Brown to crank that flex capacitor up and throw some more garbage in the disposal and head back to 1943. We need to talk about what was considered one of the greatest comeback stories of all time.

This year, as we stand 2018, there’s going to be a lot of big named stars that are going to be on their comeback trails. Just to name a few are Aaron Rodgers, Deshaun Watson, David Johnson and lets go ahead and let The Football History Dude keep David Johnson in his home league instead of Le’veon Bell and go ahead and break my wrist the first game. Lets make this year the comeback, just like Mr. Bronko Nagurski did back in 1943.

There would end up being a book that came out that Mr. Jim Dent called “The Monster of the Midway” and it was chronicled as the greatest comeback ever. Again, there’s too many out there to discuss, but this one was definitely one of the better ones of all time. He was retired for 6 years from the NFL to do his wrestling career.

But this was the time of WWII and the Bears players, many of them were drafted to go to the war and support this country. Mr. George Halas was at war himself. He told the Bears that they should resign Bronko Nagurski, but at this time he was a little older so he was going to play tackle. The guy went from fullback and linebacker to defensive tackle, then offensive tackle. He did whatever to help the team.

He was 35 years old and had a 6-year hiatus from the game. Is there one person that can go out of the league for 6 years and comeback to dominate, anyone besides Barry Sanders? We are going to talk about anyone else besides Calvin Johnson.

Mr. Terrell Owens is trying to be the first player to ever be an active player that is also in the Professional Football Hall of Fame. I don’t know if he ever is going to get there but it would be cool. It would be neat to see a guy that old and that good of shape to get it done on the gridiron.

But we are talking about Bronko Nagurski, and like I said, he would be the offensive tackle and pave the way for the runners. Late in the season the Bears players kept getting drafted so they would turn to him to become that runner. He would near the end of the season go back to his old position of fullback and he would be a man on a mission.

He would bring back what I call, “Bronk smash”. He would end up doing this in a game that the Bears had to win to get into the playoffs. He ended up getting the winning touchdown, which would put the Bears into the championship where they would face, the Redskins. He would end up ending his career in this game but not before he scored a touchdown that let the Bears stay ahead in this championship game and give them the victory.

He had a long career that spanned football and wrestling where at the time wrestling was a major sport. He was able to Bo Jackson style it into two major sports at the same time and be successful.

Because of his dominating performance on the field, Bronko Nagurski would end up becoming a Charter member Pro Football Hall of Fame in 1963. There was a quote form Mr. Ernie Nevers, the guy that we talked about that had 40 points all by himself and still holds a record and he had a quote:

“Tackling Bronko was like tackling a freight train going down hill”

So either you step out of the way or you are going to get run over because you are not stopping that thing. They would end up erecting the Bronko Nagurski museum in International Falls, Minnesota where he spent his later days because they had to honor this individual who gave all he had to the game of football.

He would even come back at the age of 35 to have, what they say, was one of the greatest football comebacks of all time. If you end up going to that museum, snap a couple photos and send them to me, that would be cool to put on my website.

Lets get back to the episode, the United States Postal Service ended up issuing a stamp collection on August 8th, 2003 which they called “Early Football Heroes”.

You and I get to enjoy each week watching our favorite football team. Mr. Bronko Nagurski would end up passing away on January 7th, 1990. 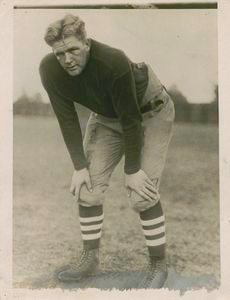