The New York Giants joined the National Football League in 1925. From that time until 1964, the team had success. Here’s how.

Although there wasn’t an NFL championship game played in 1927, the Giants were named NFL Champions based on having the best record in the league (11–1). They would play in 14 NFL Championship games between 1933–1963. Although they won only three of those games, playing 14 title games in 31 years is impressive.

The Giants Fall off the Top

But success could not be sustained. From 1964 to 1980, the Giants never reached the post-season and had only two winning seasons. Giants fans were fed up with losing, and their ire boiled over.

On November 19, 1978, the Giants lost at home to the Eagles in the famous Herman Edwards fumble recovery game. The following week, Giants season ticket holder Ron Freiman organized a ticket-burning rally at the stadium with about 100 angry Giants fans participating.

In December, another season ticket holder, Peter Valentine, hired a pilot to fly a plane over the stadium with a banner — “15 Years of Lousy Football — We’ve Had Enough!”

In 1981, the Giants finally reached the playoffs with a 9–7 record and defeated the Eagles in the Wild Card Game. But they lost the following week in the divisional playoff game to the SF 49ers, 38–24. The good news was that linebacker Lawrence Taylor won the Rookie of the Year award and was named Defensive Player of the Year.

But the Giants returned to their losing ways in 1982, going 4–5 in a strike-shortened season, and Head Coach Ray Perkins resigned to take a head job at the University of Alabama.

The Giants hired Bill Parcells for the 1983 season, but the team did not do well, finishing with a dismal 3–12–1 record. Lawrence Taylor was again the bright spot, winning the Defensive Player of the Year award for the third consecutive time.

Things got better in 1984. The Giants went 9–7, made the playoffs, and beat the LA Rams in the Wild Card game before losing the divisional playoff game to the 49ers. Big Bue got even in 1985 when they beat the 49ers 17–3 in the 1985 Wild Card game. And although they were shut out 21–0 the following week by the eventual Super Bowl Champ Chicago Bears, Giants fans had high hopes for the 1986 season.

The season opener was a tough assignment on the road v. the Dallas Cowboys, and the Giants lost a close one, 31–28, on Monday Night Football. Winning began the following week at home when the Giants’ D forced eight turnovers (that’s right, eight) in a 20–7 win over the Chargers.

Weeks 3 and 4 saw two more wins–against the Raiders on the road (14–9) as Joe Morris ran for 110 yards and the Giants D held Marcus Allen and company to just 58 yards rushing. Then a come-from-behind rally (down 17–0, then winning 20–17) versus the Saints.

The team upped its record to 5–1 with consecutive wins over the Cardinals (13–6) and the Eagles (35–3), holding the Philly offense to just 58 total yards and sacking Eagles quarterbacks six times. Lawrence Taylor had four of those sacks.

The winning streak ended in Week 7 against Seattle when the Giants allowed six sacks and Phil Simms threw four interceptions. New York bounced back at home the following week against the Redskins, 27–20, even though Washington had success through the air (420 yards).

But the Redskins success was countered by the Giants’ work on the ground, led by Joe Morris, who ran for 181 yards. Nineteen miles away, the New York Mets came from behind to defeat the Boston Red Sox in game seven of the World Series.

A Rematch With the Boys'

That win set up a rematch against the Cowboys, the team that had beaten the Giants in the season opener. This time, New York came out on top, 17–14, as Morris ran again for 181 yards. The team went 8–2 the following week when the Giants claimed another victory over the Eagles (17–14). Showing consistency on offense and defense, Taylor had three of the Giants’ seven sacks, and Morris went over the 100-yard mark again.

The Giants went into Week 11 at 8-2 on the season. The Giants traveled to Minnesota and trailed the Vikings 20–19 with just 1:12 left on the clock. But in what might have been his best game of the season, quarterback Phil Simms connected with receiver Bobby Johnson on a fourth-and- 7 for a first down. Moments later, kicker Raul Allegra kicked the winning field goal to give the Giants a 22–20 victory.

Week 12 would be a true test against the 9-2 Denver Broncos, but the Giants prevailed 19–16 in a hard-fought defensive battle at Giants Stadium. The big highlights of the game were a 78-yard interception for a touchdown by 34-year-old defensive end George Martin and a 46-yard TD strike from Phil Simms to Phil McConkey.

The schedule didn’t get any easier for the Giants as they were going up against the 1984 Super Bowl Champion SF 49ers eight days later on Monday Night Football at Candlestick Park. It didn’t look good for the G-Men as the 49ers took a 17–0 halftime lead. But things changed quickly.

Tight end Mark Bavaro inspired his teammates with a routine catch over the middle, and it took seven defenders to bring him down finally, some of whom he carried for almost 20 yards. The play awoke the sleeping Giants as they came back to win 21–17. Phil Simms threw for nearly 400 yards, and receiver Stacy Robinson made an extraordinary catch at the goal line to set up the winning touchdown.

Closing Out the 1986 NFL Season

A Week 14 matchup against the Washington Redskins at RFK Stadium would decide first place in the NFC Eastern Division. The two teams came into the game with identical 11–2 records.

With game-time temps reaching a chilly 14-degree wind chill factor at the Meadowlands in Week 15, the Giants made short work of the Cardinals, 27–7. Perhaps the weather had something to do with the Giants gaining only 62 yards through the air, but it didn’t matter as their ground game churned out 252 yards, 179 coming from Joe Morris. The Giants D dominated the Cardinals, too, registering nine sacks on the day.

With home-field advantage throughout the playoffs now on the line, the Giants pounded the Packers 55–24 in Week 16. The game’s highlight was a blocked punt, which was returned for a TD by former Packer Tony Flynn.

The win gave the Giants home-field advantage and a two-week rest to prepare for their old nemesis, the SF 49ers. The 49ers were hungry for revenge after losing to the Giants in their last two matchups. It looked like they might get that revenge when, on their first series, receiver Jerry Rice was off and running for what looked like a sure touchdown. But Rice inexplicably dropped the ball, and the Giants recovered.

From that point on, it was a rout as the Big Blue defense held SF to just 184 total yards. The key play for the Giants came in the second quarter when nose tackle Jim Burt hit Joe Montana, and Lawrence Taylor intercepted the errant pass and ran 34 yards for a touchdown. That hit also knocked Joe Montana out of the game. On the other side of the ball, the Giants offensive line dominated the line of scrimmage as Joe Morris ran for 159 yards and two touchdowns.

With winds reaching 33 miles an hour at the Meadowlands, the Giants prepared to play the Washington Redskins for the third time this season, with the winner going to Super Bowl XXI. New York started quickly, taking a 17–0 lead into the locker room at halftime. Then the Giants’ defense dominated the second half shutting out the Skins to preserve the 17–0 victory. One of the keys to the game was the play of Giants offensive tackle Brad Benson who neutralized the Redskins top pass rusher Dexter Manley, who had 18.5 sacks during the 16-game regular season.

Now, it was on to the Super Bowl, and on January 25, 1987, the Giants took on the Denver Broncos at the Rose Bowl in Pasadena. The two teams had met just two months earlier, with the Giants winning on a late-game field goal. Giants QB Phil Simms and Broncos QB John Elway were both hot in the first half, and Denver took a 10–9 lead into the locker room at halftime, but the Giants’ offense exploded in the third quarter, scoring 17 unanswered points.

The Giants went on to claim an easy 39–20 win. The game’s hero was the often criticized Phil Simms, who threw three touchdowns and completed 88% of his passes en route to winning the Super Bowl MVP award.

The Super Bowl victory was an exclamation point to the team’s most successful season in their long, storied history. Head Coach Bill Parcells won the Coach of the Year award. 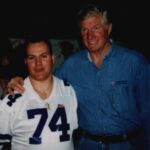 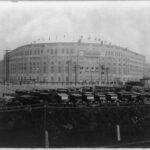