The Carlisle Indian Industrial School football team was an underdog story fit for the movies.  Beginning in 1879, Native American children were taken from their homes and sent halfway across the country to attend this “off-reservation boarding school” in Carlisle, Pennsylvania.  Athletics was an escape for many of the children, including the most famous athlete of this time, Jim Thorpe.  At this Carlisle Indian School, Jim Thorpe and Glenn “Pop” Warner, helped create modern football.  This week’s guest wrote a book about this incredible story, and in this week’s episode he shares the origin of Jim and Pop, leading to the dominating Carlisle Indian School football team.

Steve is the author of many books, most notably for this episode, Undefeated: Jim Thorpe and the Carlisle Indian School Football Team.  I also included links to his other books at the end of this post, if you are interested.  You can also learn more about this movie making, graphic novel publishing, (former textbook yawner), and non-fiction book juggernaut at the Steve Sheinkin Website.

Who Was Jim Thorpe?

Jim Thorpe was born on May 28, 1888, in what is now Prague, Oklahoma on an Indian Reservation.  His mother gave him the name Wa-Tho-Huk, translating into “Bright Path.”  Although his parents didn’t know it at the time, Thorpe would forge his own bright path in the future.  As a young Native American boy, he was hard to handle.  he didn’t want to stay in school.  His father ended up sending him to an off-reservation boarding school called the Carlisle Indian Industrial School.

At this school, Jim made a name for himself in athletics, later dubbed “The World’s Greatest Athlete.”  That moniker was given after he dominated the 1912 Stockholm Olympics.  Before that, he was a star athlete in many disciplines.

Steve shares the story of Jim’s “audition” for the football team, which happens to be the opening scene for his book, and it’s the perfect Jim Thorpe movie moment.  Another great movie moment would be September 17, 1920, in Ralph Hay’s Hupmobile auto showroom.  Jim Thorpe was voted the first President of the newly formed American Professional Football Association, later to be changed to the National Football League.

The name and fame of Jim Thorpe helped put the league on the “legitimate map” in the beginning.  Although Thorpe was a seasoned veteran by then, he helped the league gain steam in the beginning years.  Ultimately, he was inducted into the Pro Football Hall of Fame as part of the inaugural 1963 class.

You can learn  more about the Jim Thorpe-Pop Warner connection and how they turned the tiny Carlisle Indian Industrial School football team into a powerhouse to be reckoned with in the early 20th century.

More Resources For This Episode

More Posts From the Pre-NFL Era

Indoor football in the NFL is not uncommon as we... 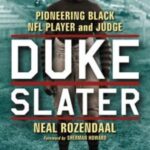 When you first heard about the Pro Football Hall of...

If you were to watch an American football game 150...

Hugo Bezdek was a man who played professional football BEFORE...