The first video game ever was created by physicist, William Higinbotham, called Tennis For Two in 1958.  This game was played on an osciloscope and it somewhat resembled what we all relate to as one of the original “sports” video games out there, Pong.

The evolution of video games has transformed tremendously over the years, but for me, football games reign supreme.  Whether you’re talking Tecmo Super Bowl, Madden, or any of the other football video games in history, count me in.  This week I share some of my most cherished moments connecting my love for football and video games. 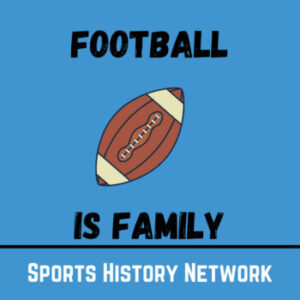 The problem is there are times when there are no sports on television. When I was growing up, ESPN and 24-hour sports weren’t a thing yet. There were no reruns, no internet, and no cell phones (otherwise known as the Dark Ages).

What would you do with the no-sports time? Read?  Nah. Clean? Get real.

Enter Nintendo, Sega, Sony, and Microsoft. They realized the need and produced for people like us. Thus video sports games came into existence.

You may wonder what sports games have to do with football being family. Well, I will tell you. Sports games and family have a very special connection to me, and probably to you, too.

When I started 5th grade, two things happened. First, I came down with mono, which eventually led to Chronic Fatigue Syndrome. I couldn’t stay awake or do much without being too tired or weak. Needless to say, it wasn’t a good time.

Second, I got introduced to Tecmo Bowl on the NES. This game made a bad situation turn into something better.  One of the highlights of my week was to go to the movie store Friday and rent the game for the weekend. I can’t tell you how many games I played of Tecmo Bowl.

The funny thing is, I now own that game on the Wii and Nintendo Classic- the codes that worked back then still work today.

Later on, I got hooked on Tecmo Bowl Super Bowl, the first game that actually kept up with stats, had a save feature, allowed players to win the MVP (usually it was Christian Okoye, who played for the Chiefs), and have an awesome halftime show in the Super Bowl (the Mighty Bombjack Show).

I played many other football games (Ten Yard Fight, John Elway Football, etc.), but none could equal the Tecmo Bowl games.

As the gaming systems advanced, so did the football games. When PlayStation 1 was released, I started buying a game called Madden Football. Although it was released earlier on the Sega, I got into with Madden 2001 (I currently own 2001 and 2008- both have Titans players on the cover).

If you are like me, this game, along with 2K Sports, allowed you to get closer to the NFL than you ever could before. You could trade players, resign or release players, draft, adjust prices for food and drinks, move teams (I once moved the Titans to Chicago- it wasn’t a good fit), and build new stadiums. It was and still is, an amazing way to experience football.

Although the newer games have moved away from this formula to a more loot-box system, the older games really captured what the average fan wanted from a football game.

Although I enjoy the Madden series in franchise mode, I don’t feel the same for the online mode. I started playing online a few years ago. If you haven’t played online, let me warn you- there are people out for blood looking to play you. In order to make your team better, you either have to play games for points and then use those points to buy packs of cards.

Those cards represent players you can get for your team. The more cards you get the odds of getting a great player increases. You could also buy packs with real money (something I refuse to do). One day I got online to play with a team that I created that I thought was pretty solid. That was until I started playing someone I didn’t know. I noticed his kicker had the last name of Jackson.

Yes. That’s right. His kicker was Bo Jackson. His worst player was Vincent Bo Jackson, probably the greatest athlete to ever play in the NFL. The game was ended by the computer due to the Mercy Rule. I haven’t played online since.

Now back to the story at hand. Along with Madden came other aspects that made this series fun. Madden Nation, a television series that aired for 4 seasons, took great Madden players across the NFL nation, playing against each other in order to eventually play for some serious money at Times Square in New York City.

I would love to see this show come back on. If you are like me, the love for football games didn’t stop at Madden.

NCAA football made its way into my rotation. My college friends and I had seasons where we would try to build a bad team into a powerhouse. Let me assure you this- if you had one bad season, you couldn’t recruit anyone.

I once had to play against a friend of mine whose slowest player (his punter) was faster than my fastest one. That game wasn’t good. We need a new NCAA game sooner rather than later.

Some of My Stories

If you have played these games long enough, you probably have funny stories to go along with them. I want to share a few that maybe you can relate to.

I learned that Bo Jackson (Tecmo Bowl series), Michael Vick (Madden 2004), and Johnny Manziel (NCAA 14) have to be banned. They are so much better than any other player in the history of those games.

My college friends and I played dynasty mode on NCAA 2000 one year. I picked Purdue and played against a friend of mine in a playoff game. I was losing, so, with the clock running down, I started to drive for the go-ahead score. I knew that I had to get out of bounds to stop the clock, otherwise I would lose.

So I rolled Drew Brees out to the right in order to run him out of bounds. I thought I had crossed the line of scrimmage, so I pressed A to speed up.

As silly to some as it may sound, football games, to me, play a special part of my childhood, and even now.

Is it a waste of time- may be to some.

But it is still football. There is no offseason for Madden and Tecmo Bowl.