Cardinals’ legend Marshall Goldberg was in the news recently when newly acquired defensive standout J.J. Watt asked to wear #99 for the Cardinals this season. The only problem was that this esteemed jersey number has been “retired” by the team since before the 1951 season in honor of Mr. Goldberg’s playing career. Watt has since received permission from Goldberg’s daughter to “unretire” the number.

Surprisingly, many have asked: Who is Marshall Goldberg?

Goldberg (1917-2006) was a two-time All-American at Pitt before playing eight seasons with the Cardinals and leading the team to the 1947 NFL championship. He was named All-Pro four times and was inducted into the Cardinals’ “Ring of Honor.” Goldberg was a threat on offense with his running, receiving, and return ability. However, he was likely the NFL’s first defensive specialist at the end of his career.

Goldberg played his safety position like a detective searching for clues or predictable situations. He studied opposing offenses, memorized plays, and anticipated play calling by quarterbacks, although for all but his final year in the league, Goldberg was a durable two-way performer.

Interview With Joe Ziemba About Goldberg

Table of Contents (Minimize to the Right --->)

Marshall Goldberg to the Chicago Cardinals

Drafted by the Chicago Cardinals in 1939, Goldberg was a two-time All-American at the University of Pittsburgh, leading his team to a national title in 1937. Over 80 years ago, Goldberg was probably the most famous football player in the country while at Pittsburgh. He established a school career rushing record of 1,957 yards over his three seasons that stood until Tony Dorsett surpassed that mark in 1974.

Goldberg once mentioned that a game he played on his birthday in 1936 (when he turned 19) against favored Notre Dame, was his favorite. Goldberg rushed for 177 yards as Pitt downed the Irish 26-0, Years later, Goldberg said: “I’ve never had a birthday like it since!” After that game, legendary sportswriter Grantland Rice marveled:

“No one who ever saw that game will ever forget Goldberg. He smashed the Irish line, lanced the Irish ends, drove the Irish almost frantic so that more than once they took time to catch their breath—which was easier than catching Goldberg!”

Goldberg was a member of Pitt’s “Dream Backfield” as he led the team to the 1936 Rose Bowl championship and that 1937 national title (9-0-1 record). After playing two years at halfback, Goldberg demonstrated his “team-first” mentality in 1938 (8-2 record) by taking over the fullback position. He finished as the runner-up in the Heisman Trophy race behind Davey O’Brien of TCU. In 1939, the Chicago Tribune stated that “Goldberg was an All-American fullback in 1938, but if he’d played tackle, he would have been All-American at tackle!”

After being selected with the 12th overall pick in the 1939 draft (held in December of 1938), Goldberg provided the NFL with a boost by signing with the Cardinals instead of ignoring pro football as many other players did at that time. A broken foot suffered prior to the 1939 season hampered his rookie year performance (under Coach Ernie Nevers). Still, he managed to impress Nevers with his toughness and agility on the field.

In 1940, Goldberg blossomed under the tutelage of new coach Jimmy Conzelman and the two men forged ahead in rebuilding the Chicago Cardinals. By 1941 Goldberg was among the league leaders in rushing and receiving and topped the circuit in kick-off returns, return yardage, and interceptions with seven.

However, he was also drawing rave reviews for his creative, smothering defensive style. Goldberg would attempt to out-think his opponents and generally succeeded. He once recalled: “Each quarterback had a unique way to run one play in order to set up the next play. Once I studied the trends of a quarterback, I would know the sequence and leave before they snapped the ball.”

Goldberg also evaluated the opposing team and learned the individual traits of the players: “You could watch each player and get some clues about where he was going. For example, if a guy’s going deep, his weight would be leaning forward. When you see he’s not leaning forward, then he’s going somewhere else. Usually, he’ll also look in the direction where he’s going to see if it’s clear. If his hand was light at his side, he wasn’t planning on blocking someone either.

I was lucky, but that was some of the stuff you would look for on defense.”

With his natural instincts and quickness, Goldberg was probably the first safety to roam near the line of scrimmage and even “blitz”, as we know it today. Had All-Defensive teams been selected during his career, he would have been a perennial selection on such a squad. The late owner of the Cardinals, Bill Bidwill said in 1999: “There’s nothing new today in defense that Goldberg didn’t do.” He was rarely off the field and continued to field kick-offs as well. In 1942, he paced the league in that category again and broke his own league record for returns and return yardage (393 yards) while still making an impact on both sides of the line.

The Cards looked forward to playing soon in a possible new 53,000 seat riverfront stadium. Until then, the Cardinals would line up initially in cozy Sportsman’s Park. “This is good news for St. Louis,” exclaimed August Busch, the president of the St. Louis baseball Cardinals. “The football Cardinals will give our city a year-round program of high-quality sports,” Busch told the St. Louis Post-Dispatch.

While Chicago Cardinals’ fans had feared this final announcement, it likely caught a few journalists by surprise due to the ever-present denials by Walter Wolfner during the preceding week. The Tampa (FL) Times noted: “The shift of the Cards to St. Louis, announced by commissioner Pete Rozelle, came as a surprise. The day before, managing director Walter Wolfner had denied that such a widely rumored move was contemplated.”

In fact, the Times continued, “Wolfner assured the press that he did not contemplate a move of the club and emphasized that such a thing would not happen in 1960. It would cost too much to move, he said, and ‘such a move is not necessary.'”

In the end, Wolfner succumbed to the lure of a monster $500,000 pay day from the NFL for “moving” expenses. The Times added: “A large part of it, Rozelle disclosed, was underwritten by the rival Chicago Bears.” The “donation” was well worth it to the Bears and owner George Halas, since it would allow just one team to enjoy the previously blacked out and rapidly expanding Chicago television market.

A broken leg essentially eliminated the 1943 season and that was followed by military service in 1944 and 1945. He returned to action in 1946 without missing a beat and ultimately led the Chicago Cardinals to their last NFL Championship in 1947.

With the addition of halfback Charley Trippi to an offense that already included Goldberg, quarterback Paul Christman, and fullback Pat Harder, the Cardinals boasted of the “Dream Backfield,” the first time a professional team possessed four collegiate All-Americans in the same backfield. When Goldberg became more valuable to his team on defense, Elmer Angsman from Notre Dame filled in his spot in the Cardinals’ “Dream Backfield.” In the ’47 title game with Philadelphia, Goldberg intercepted a late Eagles’ pass to help preserve the Cardinals victory, 28-21, while Trippi and Angsman each scored a pair of touchdowns.

Goldberg closed out his career by playing only defense in 1948 and once again was a major factor as the Cards advanced to the NFL championship game before losing 7-0 in a Philadelphia blizzard. According to Conzelman, Goldberg had become so valuable on defense that the coach couldn’t continue to use him on offense. “He was just too valuable against the pass and as a sharp tackler,” said Conzelman, “he sacrificed himself for the team”

Goldberg finally retired on May 17, 1949, and left the Cardinals as the team’s all-time rushing leader at the time with 1,644 yards. But perhaps he is best remembered as the template for the modern NFL defensive back, a man who revolutionized the position and changed the way that defenses attack the ball. Or, as Hall of Fame Coach Jimmy Conzelman said of Goldberg:

“He is, without doubt, the best safely man I have ever seen.” A wire service article by Charles Einstein sadly commented on the departure of Goldberg: “It’s over now. Mad Marshall will never play for the Cardinals again. Not even when the wind whips cold and raw through the broken masonry at Comiskey Park and in the bleak brink of darkness, the shadow of a 99 seems to drift by on the field of play. It won’t be Goldberg. Maybe.”

In 1949 and 1950, defender Bob Nussbaumer wore #99 and responded with a team record 12 interceptions during the 1949 campaign. Ironically, Marshall Goldberg held the previous record with seven takeaways during the 1941 season.

Apparently, no one since 1950 has worn the #99 jersey for the Cardinals, but there were a couple of requests that we could find prior to the arrival of J.J. Watt in 2021. In 1990, newcomer Dexter Manley hoped to wear #99 but said, “I wanted 99 and they told me it was retired.” A year later, long-time Cardinal lineman Eric Swann also looked to wear #99.

The Arizona Republic reported: “Swann wanted to wear jersey No. 99 with the Cardinals, but he was told that the number was retired by the team after being worn by Marshall Goldberg for eight years.” Swann also played eight seasons with the Cardinals–not bad for a player with no college experience! J.J. Watt has received permission from the Goldberg family to wear the treasured #99 Cardinals’ jersey in 2021 and promised to do so with respect in honor of the wonderful career of the late, great Marshall Goldberg!

So why did Marshal Goldberg wear #99? The late team owner Bill Bidwill told the Arizona Republic: “Originally, he was #42. But then he wore #99 to demonstrate that he was always one better than Tom Harmon [1940 Heisman winner]!”

We’ll leave you with one final, quick quote about Marshall Goldberg that appeared in Sports Illustrated in 1982. Apparently, future NFL Hall of Famer Dan Marino, who also attended Pittsburgh, was showing some friends around the campus and ran into Mr. Carmel Verratti, a long-time Pitt football enthusiast. Verratti was asked: “Who is Pitt’s all-time best player?”

“Yeah, and after him, Mike Ditka. And then you’re third Danny.”

“Yeah, and you ain’t never gonna be no better than third!”

We wish J.J. Watt all the best with the coveted #99 jersey of Marshall Goldberg this season! But we’ll always remember the Cardinals’ legend who wore it first…

Interested in learning more about Joe Ziemba’s work covering the Chicago Cardinals and the early days of pro football?  Check out a massive post covering all of the original 14 teams from the first season of the NFL (at that time called the American Professional Football Association). 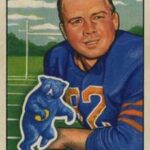 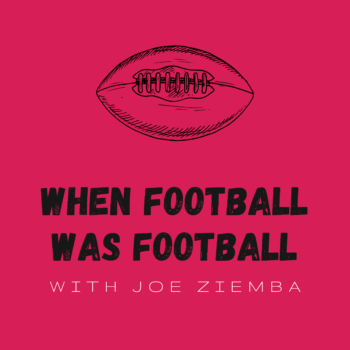 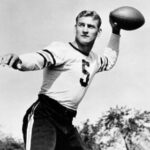 4 thoughts on “Marshall Goldberg: From the Dream Backfield to First Defensive Specialist”