This week I speak to the founder and primary contributor of PAFBHISTORY.COM, a website dedicated to the history of “The Keystone State’s Game.” Below are some of the topics we dive into:

Pennsylvania, like many other states, has a proud history of high school football. People here can’t agree on which gas station makes the best food or the appropriate second-person plural pronoun, so is there any hope we can agree on a football-related topic? Not a chance.

Ask any fan of football in the state to identify his or her favorite player, coach, team, game or achievement and you’re likely to get a different answer from each person. This is part of what makes high school football so special – because it’s so personal.

I might rationally know that my town’s team the year I was in third grade wasn’t actually the best team ever to grace a Pennsylvania football field, but you’ll never get the emotional side of me to admit that. That game in a rainstorm against our rival where the hometown player I idolized threw four (or was it five? No, six!) touchdown passes is the big fish story that grows with every year.

Some people would say that historical research demystifies these hazy memories; the splash of cold, hard fact doesn’t always jive with our rosy recollection. I would argue the opposite, however. The more we delve into the historical record, the more stories we unearth. Every once in a while, we’re even lucky enough to find a true story that blows our mythological ones out of the water.

At Pennsylvania Football History (www.pafbhistory.com), the goal is to find as many of these stories as possible and share them with high school football fans from across the state. From a century-old team whose dominance is difficult to fathom, to a tiny, record-setting running back who faced more on the field than just tackles, to documenting every state champion over a 130+ year period, there are countless stories to tell, athletes to uncover, and teams to remember (or discover in the first place).

Want to find out who has the most receiving yards in state championship game history? Or read about a Pittsburgh native who became the first Black quarterback in NFL history? You’ll find it at PFH. You can also catch up with PFH on Twitter.

The best part is that the stories of Harrisburg Tech, Earle Mundell, Willie Thrower, and many others barely even scratch the surface of the high school game in Pennsylvania. That isn’t arrogance; it would be true for any state. There is an impossible amount of historical football knowledge to be found if people commit to searching for it. I promise – it’s worth the effort. 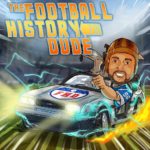